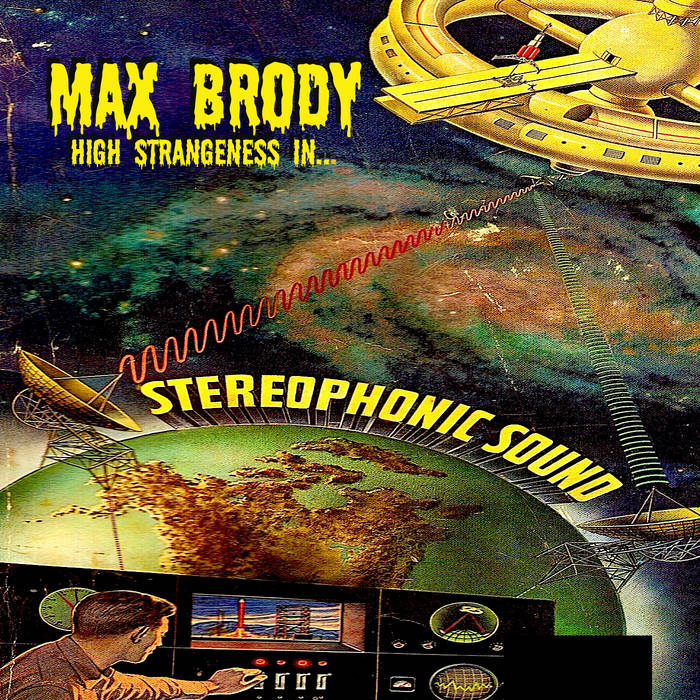 side A: HIGH STRANGENESS

I Wish I Had Never Seen It
High Strangeness
Waking Up In A Lab, Strapped Down On A Slab
Peel Out

side B: THE RABBIT HOLE

In Our Skies
The Rabbit Hole/Goes On And On...
At Least They Dropped Me Off On Earth
Planetitis
...and on, and on, and on...


I'm analyzing myself here: it seems to me that much of the time (1985-2017) I've been making construction sites rather than composing songs. Or, perhaps, "painting targets around randomly shot arrows", as Brian Eno might say (bullseyes every time!).

I've been composing via construction site style--using the recording studio as a compositional tool-- more than just sitting down with an instrument and hashing out a song. Back in the 1980's I had come up with ways of writing songs using randomness as a basis to help me come up with idea springboards that I could edit into song structures and then layer on top of to make a composition. I've gotten a lot of mileage out of that idea. I would also seek the assistance of other musicians to help me feel like it was 'finished'. Rarely have I just sat down with an instrument and come up with riffs-- stringing them together into cohesive songs and then practicing them over and over until I get good enough at them to record a solid performance of it. That, to me, is the traditional method. Not easy. Not messy.

Well, this album is different. I used the traditional method to compose these songs, sittin there with a guitar. Well, actually, on 3-stringed guitars simple enough for this drummer to work with-HA!! I have never claimed to be an actual guitar player, to be sure. But somehow I've managed to have a lot of fun tinkering around on my 3-stringers. For years now, actually...what? seven? GEEZ! Hard for me to believe that. But if it ain't broke, don't fix it, they say... I'm not planning on learning how to play traditionally. That would feel like I was taking this guitar stuff seriously or something.

Um, so, yeah...I played all the parts. No helpers. No one else to blame.

I really consider myself to be a composer, a self-taught drummer and a traditionally-taught woodwind player; but not a guitarist. Especially when I think about playing with Danny Barnes in TEST APES, who IS the real deal, or many of the fine guitarists that I've had the good fortune to work with. I kinda just like to tinker with anything that makes noise and to record stuff.

In 2010, though, I was in a harsh time of life... which oddly caused an inspired creative mind-space. And with access to an acoustic guitar that had 3 strings left on it--nylon strings, that is--I really dug in on their tone and their pure simplicity. It put me into a happy place that I really needed at the time. I ended up making the Smitty LP with it in 2011. Then, for years my creative focus went back into doing drumming and sampling/noise mash-ups and keyboards and more my normal thing. Last fall, though, I somehow blapped out another big batch of tunes via GUITAR. Maybe it was the acquisition of a couple of steel string acoustics, not sure. But, starting around September and basically through December of 2016 the majority of this material was written, practiced and recorded. I guess the title track was the first one of the batch-- and an inspiration to write more. With electric guitars/bass/drums/etc layered in, and done in a proggy kind of classic rock way, I guess it made me laugh a lot. I started to throw in lots of cliche's like self-referential riffs between tracks, an overarching outer-space theme, songs with many riffs, flute flourishes thru delay, chime trees, gongs, analog synth, fuzz bass, glockenspiels, soprano sax leads, the kitchen sink, etc...

The term "high strangeness", by the way, is attributed to Dr. J. Allen Hynek who began addressing the United Nations on the subject of UFOs on November 27, 1978 in the following way:

" Mr. Chairman, there exists today a world-wide phenomenon... indeed if it were not world-wide I should not be addressing you and these representatives from many parts of the world. There exists a global phenomenon the scope and extent of which is not generally recognized. It is a phenomenon so strange and foreign to our daily terrestrial mode of thought that it is frequently met by ridicule and derision by persons and organizations unacquainted with the facts...I refer, of course, to the phenomenon of UFOs... "

Er...ahem...anyway...Prog-rock is not very likely to be my new direction or anything but this album is rather another attempt to nod, in a series of nods, to the genres that influenced me early on... For some reason , I seem to be on a GENRE-kick; a free-jazz thing, then an ambient LP, now a Prog thing...hmmmm...? Well, I'm having fun, so screw it. In fact, this one really was a shitload of fun for me to make, so you never know. I grew up not only listening to be-bop/big band/bossa nova/avant guarde/fusion/lounge "Jazz" stuff, but also ROCK; lots of classic progressive/psychedelic groups...anyway, like I said, It made me laugh A LOT creating it. Guilty Pleasure, part 3? Its not bad, really!! HA! ...and no lyrics or screechy singers, no super-noodle-hot-dogging-solos-ad-nauseum, no soulless, show-offy, intricate melody lines played in unison, etc, etc; just like I always wanted!

I'd also like to thank my bro, Doug, for his help with mastering and his encouragement. You rock.

He now resides in Shoreline, WA

Bandcamp Daily  your guide to the world of Bandcamp

Guests include Kassa Overall and Muriel Grossman, plus an LP of the week by Van Hunt.